I woke up with a start, feeling like I’d just been thrown onto a couch.

I looked up, noticing two other people in the room with me.

I wrinkled my nose and brought my hands up in a feeble attempt to block the smell.  That intense smell of blood that tickled my nostrils made my stomach want to growl.

The green-haired woman sat beside me and gave me a fanged smile. She was a vampire and she looked very familiar.

“You’ll have to excuse Simon’s lack of manners Zyla, he’s still new.” She said gesturing towards the boy on the side of the couch.

I took a good look at him and finally remembered what happened. Yeah, talk about lack of manners.  I found myself wondering if this was really him. He looked a little too…obedient.

My nose twitched as the smell persisted.

“Blams is that you?” I asked, a little disbelieving. I wasn’t used to seeing her so…formal.

“I’m confused, what am I doing here?” I asked, gulping a little. I wish Simon would leave, I’m having a hard time ignoring the smell of his blood.

“Zyla, you’ve reached vampire maturity, it was time for you to come to your real home.”

“You’re the daughter of the current vampire king. You’re royalty Zyla, and so is Eliott. Both of you are King Velor’s children.”

“What?” I asked, laughing at little at the ridiculous notion. We weren’t in the medieval ages any more, monarchies don’t exist in this day and age. “That’s ridiculous, my father is Rex.” 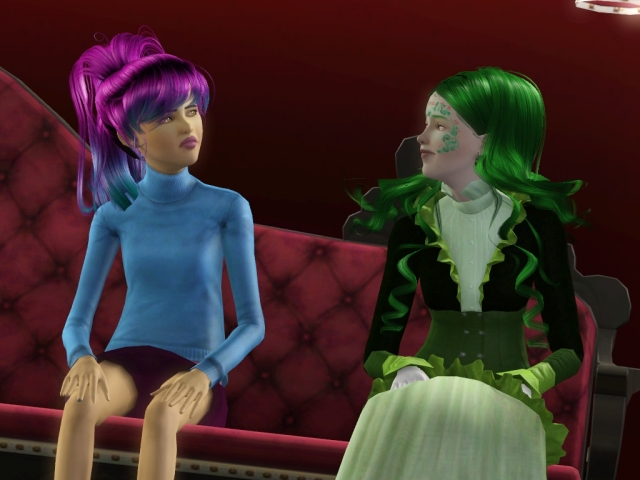 “Oh sweetie, no he isn’t. It’s pretty obvious if you think about it. You’re a vampire and neither of your ‘parents’ are vampires. You and Eliott share the same father, just like you share the same eyes and the same race.” Blams smiled.

“You’re dismissed.” Blams said to Simon as she got up.

I was trying to deny it, but the evidence she’d given me was a little too solid. Why wasn’t I more distraught over this?

Simon left without another word, making me sigh in relief, and Blams pulled out a cellphone.

A vampire princess? Me? Sounds like a fairytale…just as unbelievable.

“You can let him go now.” Blams said into the phone.

I got up from the couch as Blams hung up.

“Don’t worry, Eliott is as confused as you are.” Blams said. Did that mean he was here too?

“He’s just-” Blams was interrupted by the ringing of her cellphone.

“Sorry about this.” She said as she answered her phone. “What is it?”

I was close enough to hear what was being said on the end of the phone. That or it’s another advantage from being a vampire.

“Rehal tried to eat him, but he got away.” Said a male voice on the other end. I could hear the faint sound of someone complaining in the background. Eating? Are they vampires too? Vampires that eat naturals…I surpressed a shiver of disgust as I remembered the taste of grandpa’s blood. I’ll never ever do that again.

Blams sighed and hanged up.

“I have some business to attend to.” 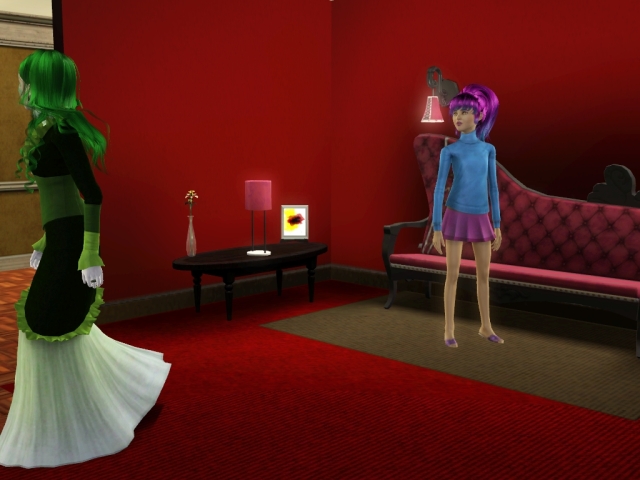 “But…” I started to say as she walked away.

“So just wait here, Arianne will come help you in a few moments.”  And with that my source of information was gone. 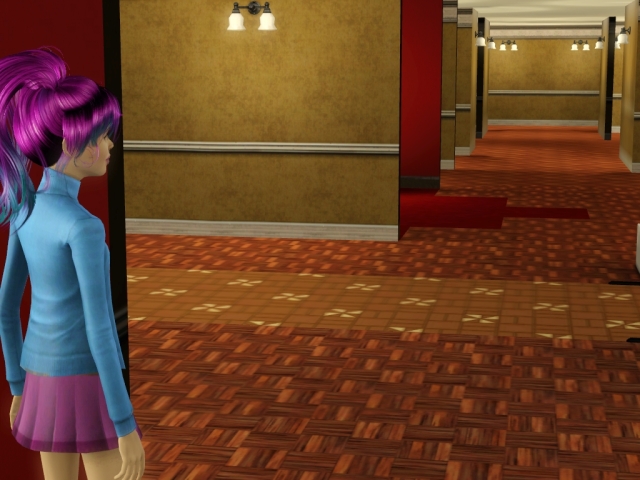 Feeling restless and curious, I went to the edge of my red cubicle to see what was around. 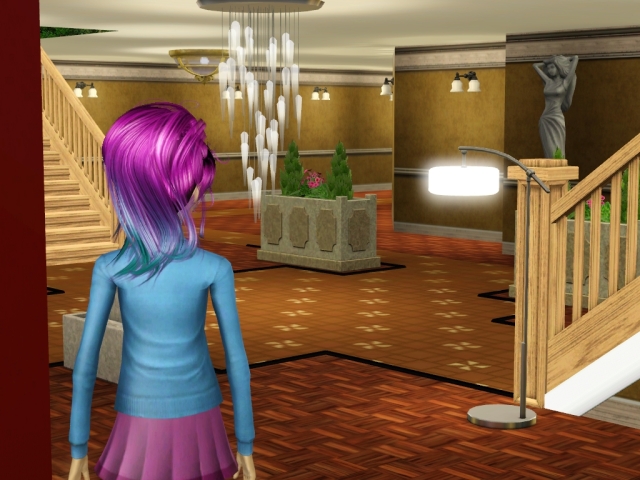 And what’s look to be the front door over there. At least now I know how to get out of this house.

I took another look around, not seeing one living soul wandering about. This place sure seems empty. 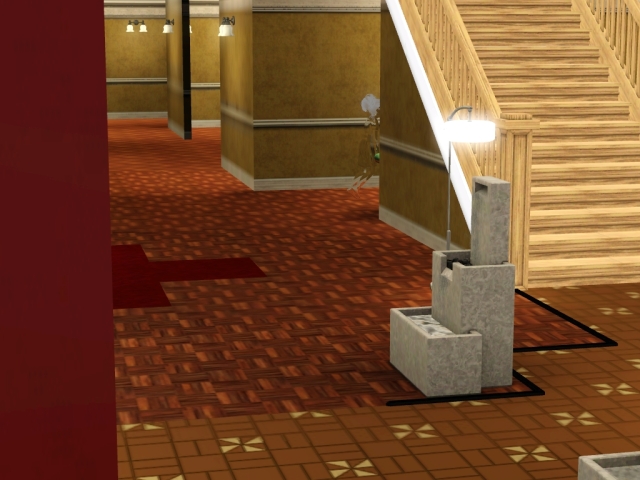 But I just as I thought that, I spotted something moving towards the back of one of the stairs.

The sweet soft smell of blood drifted to my nose. It wasn’t as intense as Simon’s…

Someone coughed from behind me and I turned around. That must be Arianne, and the source of the sweet smell. 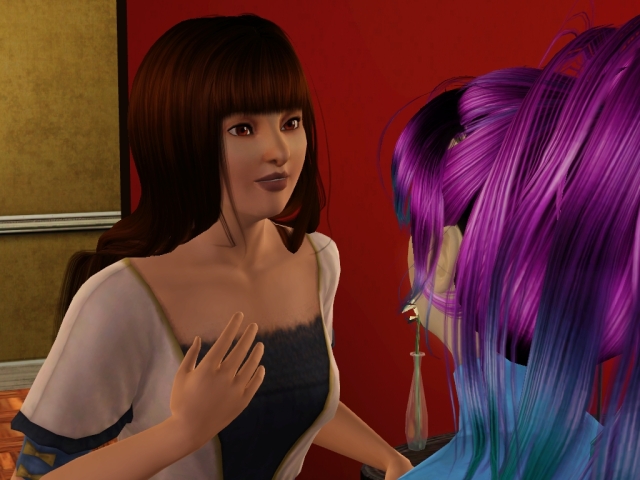 “Hello,” She said, giving me a sweet smile. “My name is Arianne. Now if you’ll just follow me, I’ll lead you to your room.”

Even though she was clos, the smell was a lot easier to resist. It was stronger than Dad, Mincia, William and Miriam’s, but still fairly easy to ignore.

“I-uh I won’t be staying that long. I just want to see Eliott and then we’ll head home.” I replied. 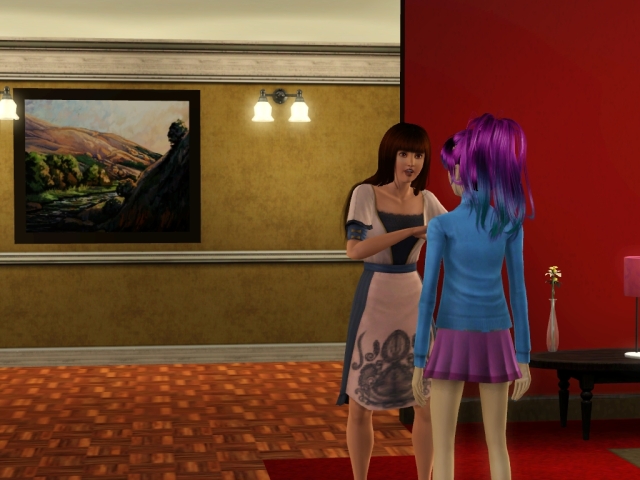 “But the Queen said-” She’d started to say before she caught herself. “I mean, he’s right over there.” She pointed at another cubicle behind me.

I hurried over and a smile appeared on my face as Eliott was indeed there, in a cubicle that looked exactly like mine. 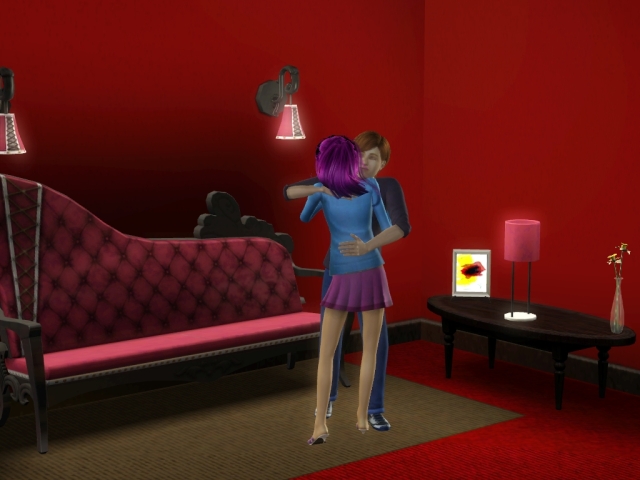 “Eliott!” I exclaimed. He saw me and smiled. I closed the distance between us and hugged him. I don’t know why, I just felt like I needed to hug someone right now.

“Zyla! Can you believe it? We’re royalty! I always wondered who my father was, but to find out he’s the vampire KING, now that was unexpected.” Eliott suddenly blurted out. He seemed really happy about this.

“Yeah, and we’re brother and sister.”

“That is a bit weird.” Eliott said. “But, look at this Zyla. We are going to live as actual vampires now.” I tried not to comment on his ‘actual vampires’.

“But Eliott, we aren’t going to live here. This isn’t home.” I said.

“Maybe you have another family Zyla, but if you remember the one I had died.” He said solemnly.

The smell of her blood announced Arianne’s arrival.

Arianne butted in our conversation.

“You’re a vampire princess, and now that you have matured you have blood responsibilities.” She explained. I was started to feel more and more like I had absolutely no say in what was happening to me right now.

“This is a vampire house right?” I asked suddenly realizing something.

“Then why are you here? Isn’t this a bit risky?”

Arianne let out a small laugh. “Not at all. I’m a donor.”

It took me a few seconds to realize what she meant. My eyes widened in slight horror.

“People willingly do that?” Eliott asked in a more surprised rather than disgusted tone.

My throat felt parched as the idea of blood trickling down it filled my head. Great, before today I was dealing with the bloodthirsty business just fine. 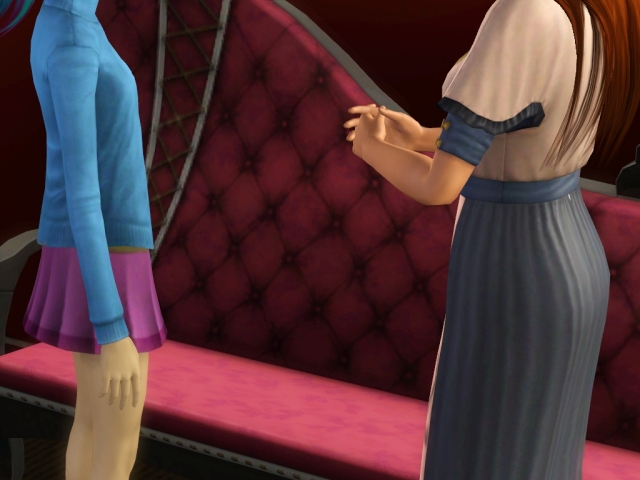 I headed for the couch to sit down and cool my head.

“I can see you’re hungry Princess. I’m disgusted at your family for not feeding you like a vampire child should be fed.” Arianne said extending her arms slightly towards me.

“No.” I stuttered out, sitting quickly under the shock. Arianne shrugged.

Two boys my age rounded the corner, walking in front of the cubicle. 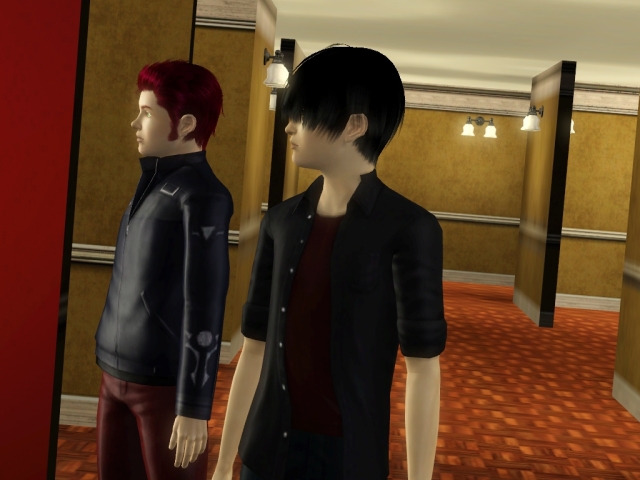 The pink-haired one stopped walking to stare at me.

I couldn’t take my eyes off the two vampires even though I wanted to hide behind the couch. They let off such an intimidating aura!

“She’s the princess dumbass.” The black-haired one said, sending chills down my back.

“Oh, so sorry my lady.” The pink-haired vampire said as he bowed slightly in my direction.  I don’t know whether it was the genuine respect radiating from his tone or his bright green eyes that kept me from saying anything.

“Don’t forget the Prince while you’re at it.” Said the black-haired vampire.

“Prince?” The pink-haired one look around a little confused before spotting Eliott and bowing to him as well. I really felt like we were royalty right now.

“Let’s go.” The black-haired one said in his calm yet bored sounding voice before walking off. The pink-haired one quickly followed.

“Who were those two?” I asked the moment the two vampires had climbed up the stairs.

“All in due time.” Arianne replied. “For now, let me show you your rooms.”

“Hey, if I’m the princess that means you have to listen to me right?” I said.

I was surprised by how quick she answered. She didn’t hesitate for one second. “That was Rehal and Kevil. They are your father, the king’s, warriors.  They’ve served the Gold family for two years now. Now can we go?” She asked, a little bit of desperation seeping into her voice.

“Why are you so insistent on showing us our rooms?”

“It was an order from the Queen.” She replied.

The Queen…I wonder who it is. But whoever it is, Arianne obviously doesn’t want to disobey her.

I finally agreed and Arianne quickly led us up the stairs. I may be letting her show me ‘my room’, but it doesn’t mean I’m living here yet.

The upstairs looked also like it was another huge level. How big was this house? 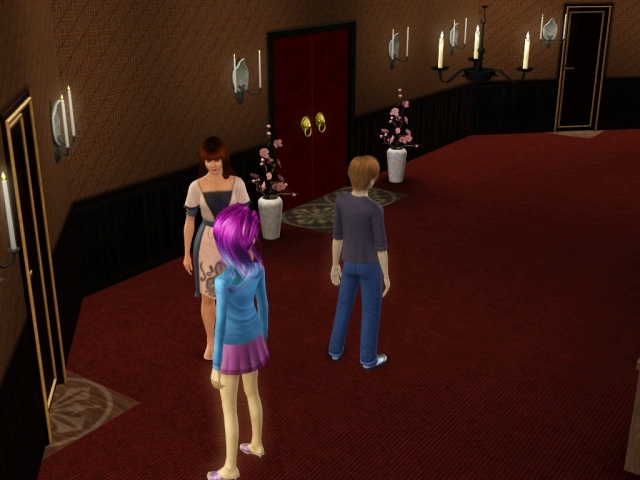 Arianne led us through the huge space before stopping before a door that looked a little fancier than the others. The closer we got, the more I had the feeling I might actually have to live here from now on.

“This is your room.” Arianne told me. “And the room over there is yours Prince.”

Eliott excitedly headed for his room, but I didn’t want to go in mine just yet.

“Will I be able to go back to my home?” I asked as it started to sink in.

“I doubt it Princess.” Arianne replied.

Arianne left and I stood in front of the door in silence.

Was this really my new home?

Rehal and Kevil! Boy I already like those two :D. If you hadn’t recognized them yet it’s the ones that kidnapped William…..

I have never worked so hard for the start of a generation before. The amount of work I put into making all the sims look different (because I have the habit of making them look all the same) and the work I put into the house! Oh wow, the house is enormous! It has three levels + a basement and it takes up the whole space of a 64×64 lot. I’m not even done too! I’ve barely started the basement and I’ve only done bits and pieces of the first two levels. I wanted to finish those first, because, well, that’s where the first chapter takes place. While we’re on the subject of the house, since this is the type of house that contains THOUSANDS of little secrets I’ve decided to give an overview of what you’ve seen of the house so far. See like this;

Now, in the heir vote, I mentioned Zyla’s generation to be interactive. Well I didn’t lie. At the end of each chapter, there will be a poll. A poll where YOU decide what Zyla does next. Each choice you make will change the storyline and give it a myriad of different endings.  Of course keep in mind you’re only choosing what Zyla is doing, which means what you choose may not necessarily happen. Zyla might want to make a peanut butter sandwhich, but there could be an outside force, or someone else who emptied all the peanut butter or has something very important to tell her. (This is a completely unrelated example) You get the idea right? Eh…you’ll see what I mean.

(Btw, all polls will only last two days.)

(Also, on a side note, it would see the songs I’ll be listening to for this generation is Assassin’s creed soundtracks. This’ll yield some interesting results.)

♪They say it's what you make♪ I say it's up to fate ♪It's woven in my soul♪ I need to let you go♪ -- Demons by Imagine Dragons
View all posts by blamsart →
This entry was posted in Uncategorized and tagged generation 6, legacy, royalty, sims, sims 3, sims 3 legacy, sims 3 story, sims legacy, sims story, story, vampire, whitelight. Bookmark the permalink.