It’s not the time to start acting stupid. I pulled out the note and showed it to him, hoping he wasn’t the type who simply liked to beat people up. His eyes went to the paper and then back to me.

The boy looked at Jamie disapprovingly, tutting in the process.

Jamie hit her forehead on the boy’s shoulder and muttered a ‘sorry’. I waved like it was nothing.

“That has to be hard! Being mute and everything! I’m Joshua and that’s Jamie.” He said in a friendly manner. He certainly doesn’t seem like the bully-type.

“He already knows.” Jamie muttered in his shoulder. 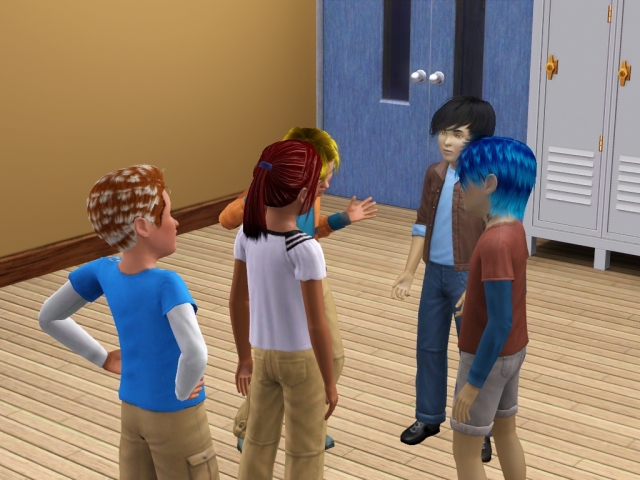 Then she straightened up and looked at me suspiciously. “Well he better have remembered.”

“Any problems here?” Lance came over trying to look intimidating.

“None at all.” Joshua exclaimed.

Of course, my brothers looked at me for confirmation and I gave it to them.

“Who are you guys?” Alec asked, still not completely convinced. Or maybe it was his need-to-know-it-all side popping up.

Joshua opened his mouth to introduce himself, but Jamie talked first.

“I’m Jamie from the student council!” She stated proudly, popping her chest out like it held a badge.

I raised my eyebrows at Joshua, but he shrugged it response.

“Yes! You interested? It’s the beginning of the year, there’s a whole lot of empty seats.” She chirped, successfully catching Alec’s attention.

And that’s pretty much how Alec sneaked his way onto a seat of the student council.

I leaned back on my locker and waited for the next class to start. I’d been at school for a little over a month now. It’s after a month that mom and dad told us we could come back if we wanted, but I think we all pretty much like it here. It’s a nice change and my siblings have already made several friends. I guess in a way I might have some too…

I thought Aliska at least would want to come back, but she was one of the more insistent on staying! She changed a lot in the last week, she’s a lot more open. I think it’s probably do to her friends influence. She’s really outgoing.

It’s not surprising Raphaele and Lance wanted to stay. Lance is a major star among the elementary school kids. Being in 8th grade and being really popular and good in sports has made him a sort of idol among my classmates.

Raphaele is also one of the popular kids. Not exactly like Lance, but she hangs out with them, even dates one of them. Which I find honestly, disgusting.

I sighed as I saw Carla walk by.

And then there’s Carla. She’s totally lonerish, I never see her with any friends and she doesn’t even want to talk to us anymore. She doesn’t get bullied either, it’s almost as if people just forgot about her existence, and she seems fine with that.

I never saw it, but apparently she drank dad’s blood once, when he was still a natural. Because of that Raphaele, Lance and Aliska tend to ignore her. I tried to talk with her once, but she ignored my hands like she couldn’t understand them. She wasn’t the one I used to communicate with the most, but she at least knew some basic signs. I can only guess she really doesn’t want to talk with us at school.

A scream suddenly erupted in the corridor and all conversations halted.

There wasn’t much else to do, I’d recognized my sister’s scream, so I followed the rest of the crowd.

Of all the things it could’ve been, I didn’t expect this.

No, see, I thought school was safe.

And so we have a death…

Aw man I really struggled with the length of this chapter. I didn’t know if I should add more to it since I don’t like extra short chapters like I’ve just done. But this was a type of cliffhanger that would’ve been a shame to waste! So in a way, I guess I could’ve joined chapter 1 and 2…

Either way! I have some building to do and building tends to slow down chapter production. So either you had this chapter now, or in another four or five days…

No vote this time…sorry y’all.

♪They say it's what you make♪ I say it's up to fate ♪It's woven in my soul♪ I need to let you go♪ -- Demons by Imagine Dragons
View all posts by blamsart →
This entry was posted in Uncategorized and tagged generation 7, James, legacy, sims, sims 3, sims 3 legacy, sims legacy, sims story, story, vampire, whitelight. Bookmark the permalink.