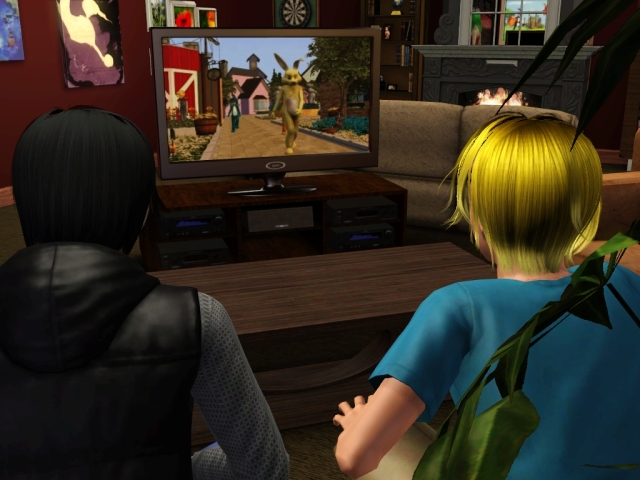 I pressed the button on the remote control and a kids show popped on.

“Bugs bunny!” Joshua exclaimed, suddenly very interested in what the t.v. had to show.

There was no hesitation in my movement, I went to press the button for a new channel.

But Joshua caught my action and stole the remote away.

“Change it already!” Jamie said, hiding her eyes as if the view was too much.

“No I want to watch this, let me watch this in peace!” Joshua said.

I was about to make a dive for the remote control when I spotted something odd through the aquarium window of the chill out room.

Some blond girl was walking by, but there was something about her that seemed a little too familiar…if her hair wasn’t so blond I could’ve sworn she looked like Aliska. Hell that is Aliska!

When did she dye her hair?

I ran out of the room to intercept her, but I was stopped in my tracks as I saw Mariposa walking behind her.

“Hey James.” She said, flashing me a fantastic smile.

Okay, it is not time to be all nervous because Mariposa is there and that she said your name, time to ask your sister why she went and dyed her hair.

So I did just that. ‘What’s with your hair?’

“What don’t like it?” She asked with a teasing smile. I frowned.

‘It’s not that. Did you ask our parents first at least?’

“Do I really have to tell them everything? And plus, it’s my hair so I’ll do what I want with it.”

‘Why then?’ I asked her. She let out an annoyed sigh.

“You could have just told me you didn’t like it.” She snapped before walking away. I wanted to strangle my sister right now.

A small laugh behind me reminded me Mariposa was still here. 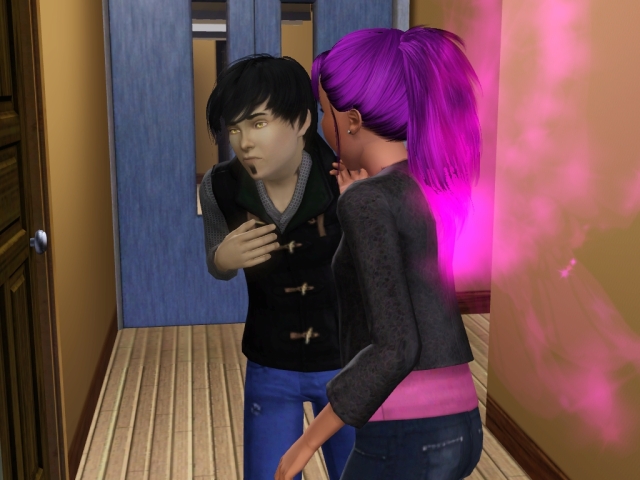 She motioned for me to come closer with her finger.

Heart beating a little faster I leaned in.

“She says it’s because the dormouse told her the bunny prefers blondes.” She whispered, her breath tickling my ear.

I looked at her in confusion.

“Basically, it’s for a guy.” She said, shrugging slightly.

Of course it is.

I stared questioningly at my little brother. During my lunch break Alec had suddenly crashed at the cafeteria and demanded he have a talk with me.

The wise choice when Alec ‘demands’ stuff is to do as he says so he doesn’t throw a tantrum. I really wish I was kidding about the tantrum thing.

“I want to talk about being a vampire, and really there is no one else to talk to about this because I don’t feel like talking to mom.” Alec stated. How nice of him.

“You must have felt it too right? The thirst? I’ve started smelling people’s blood. My fangs grew out, see?” He said, showing me a full frontal of his vampire teeth. “It’s kind of freaking me out to be honest. You’re sitting next to a student, and then all you can see is their throat…It’s happened to you right?”

He asked, staring at me, almost pleading me to be in the same boat as him. And logically I should be. But, guess things aren’t very logical in real life. I’m mute after all.

I opened my mouth and showed my brother my fangless mouth. His eyes widened at the sight. Yeah, I’m way past the age yet I still don’t have any vampire teeth. It freaked me out at first, but hearing my brother worry about it just made me feel better.

“Your teeth…you don’t have any yet?”

I shook my head.

“Did you ever get thirsty…?” Alec asked tentatively. I shook my head at that as well. I hadn’t felt any need to drink blood. If anything I’d developed a big taste for meat. 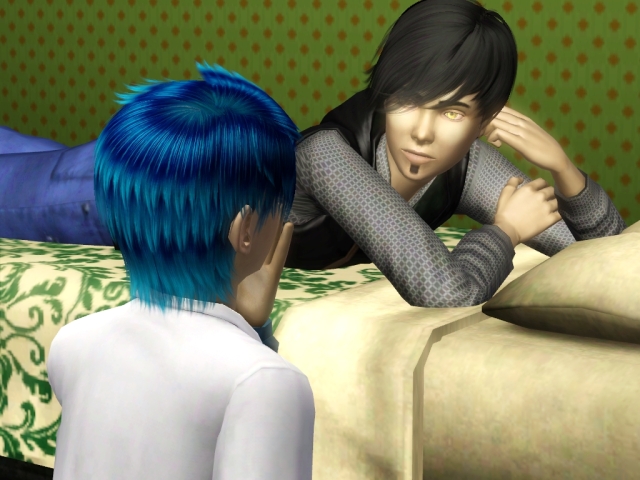 With a disturbingly concerned look on his face that made me feel like something was seriously wrong with me, Alec crawled over to the bed.

“Can I check it out?” Alec asked trying to get his fingers in my mouth to check my non-existent fangs. I swatted his fingers away annoyingly. “James, you’re gonna need to get yourself checked out. I’m pretty sure this isn’t a good sign.”

My brother was getting on my nerves now.

“Of course not, it’s just something you might want to look-” Alec stopped talking as he saw me telling him something else. 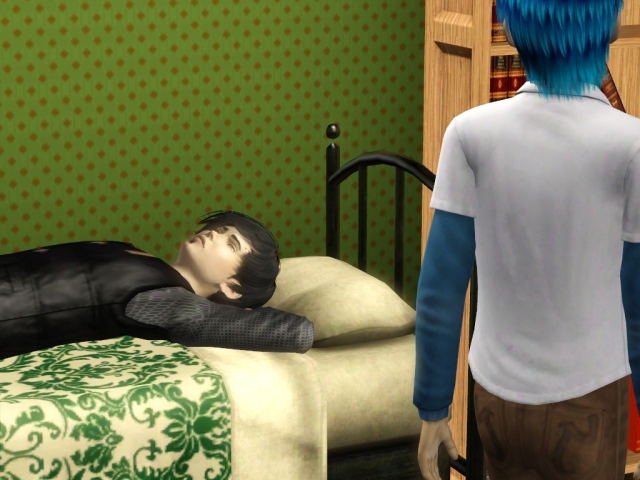 “Fine, be like that.” Alec grumbled as he got up.

Hey! If anything me not wanting blood or having fangs should be considered a good thing. It means one less blood thirsty vampire roaming the school.

‘Don’t forget to tell mom.’ I joked before he stopped looking. Mom had told us five hundred times to tell us the moment we started getting symptoms.

“Oh shut up.” He said in a slightly more happy tone.

The door closed behind my brother.

I tongued my ‘natural’ fangs.

Should I be worried? Should I worry that I don’t want to drink my friends’ blood, that I won’t ever become like Carla, compelled to drink people to death?

I make it sound like a good thing that I’m not completely vampire just yet, but…

Is it a bad thing? 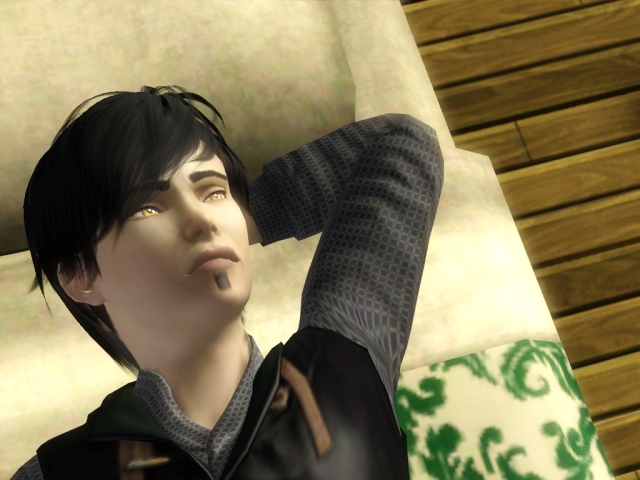 I bet if I went to see a professional they’d tell me I just had to wait it out. Eventually I’d be a real vampire. But for some reason, I have this feeling…this certainty that this is about as vampire as I’m going to get.

I’m not really a vampire, but I’m certainly not a natural.

No. I’m a failure. I’m a goddamn abomination.

Where did my positive thinking go?

What do we have here? Yet another chapter? How odd! Just a call it a burst of inspiration, I’ve been writing chapters non-stop and was only forced to stop because of the vote- OOPS was that a spoiler?

♪They say it's what you make♪ I say it's up to fate ♪It's woven in my soul♪ I need to let you go♪ -- Demons by Imagine Dragons
View all posts by blamsart →
This entry was posted in Uncategorized and tagged generation 7, James, legacy, light the way to heaven, sim, sims, sims 3, sims 3 legacy, sims 3 story, sims legacy, sims story, story, vampire, whitelight. Bookmark the permalink.