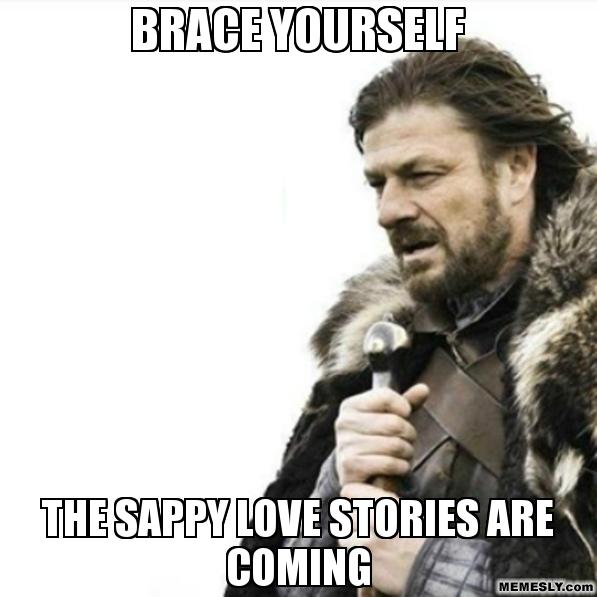 Don’t say I didn’t warn you 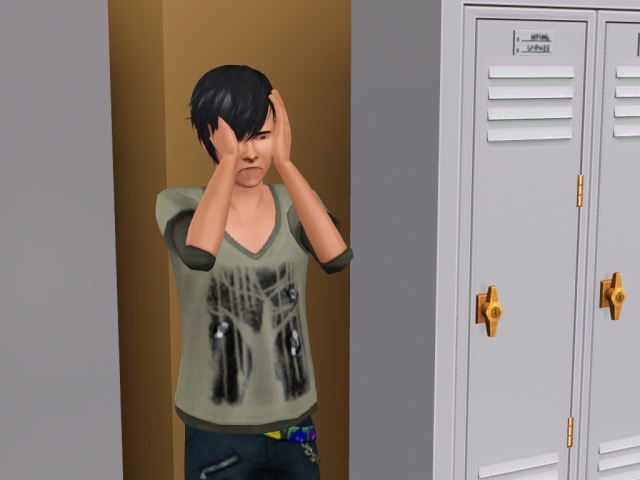 I grabbed my warm face to try and cool it and I put all my concentration into stabilizing my wild heartbeat.

I can’t believe that just happened!

First some bastard – probably Edmund – locks the closet door. Then I have a claustrophobia attack. Something I haven’t had in ages. I thought I was finally done with that, but seems not! And then when I come to, it’s Edmund of all people I’m holding on to!

And then another realization hit me.

I forgot the key and the supplies! 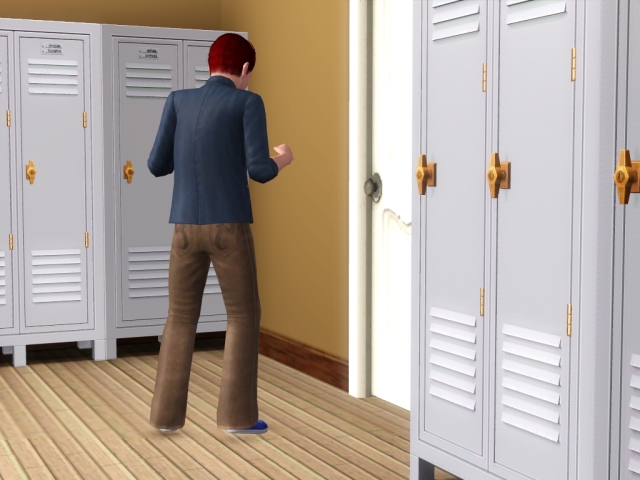 I glanced down the corridor to see if Edmund had gone yet. He was still in front of the closet door unfortunately and in fact he was plucking the key from the door.

He flipped it in the air with a smirk on his face and then turned towards me. I instinctively backed up, hiding behind the lockers. 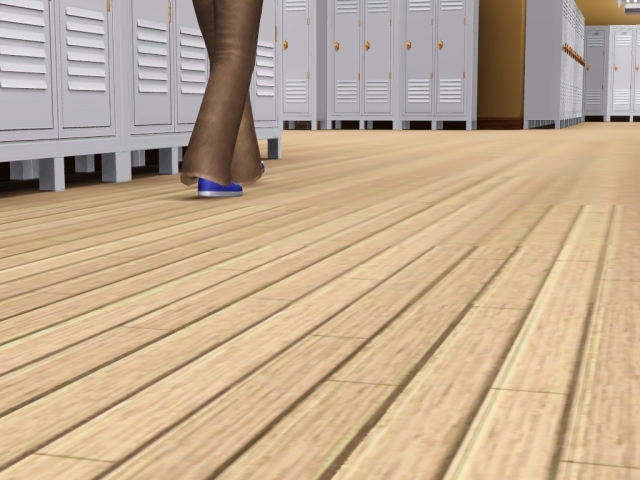 His footsteps seemed a little too loud in the empty corridor.

I started getting nervous the closer he got. Had he seen me come here? I need that key! Am I going to have to fight him for it?

I could ditch the key, but then my art teacher would get pissed, and then she’d tell the principal and then all this would just give me trouble I don’t need. No, I cannot afford to lose that key. 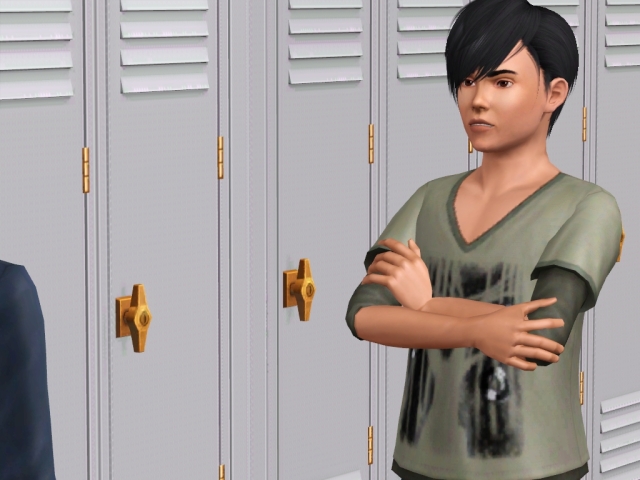 Edmund actually looked surprised when he saw me around the corner. I didn’t waste any time.

“Give me the key.” I demanded a little too harshly, but my heartbeat had already started skyrocketing again I as remembered clinging to him just a minute ago.

Edmund seemed to find my attitude pretty odd, but I maintained my glare under his confused look. His confusion didn’t last very long.

He held up the key, looking at it like it was an entirely new and fascinating object. “This key?”

“Yeah give it over.” I said. I didn’t uncross my arms however, nor did I move. 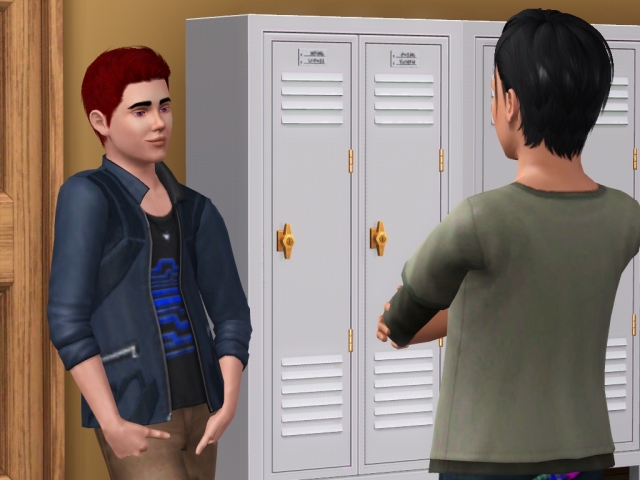 He smirked. I don’t know why but the appearance of his suddenly cocky attitude completely unbalanced me.

“What was that little panic attack you had over there? You afraid of the dark or something?” He teased.

Dang it, of course he’d been wondering. I was clinging to him for god’s sake!

“None of your business. Give me the key.” I demanded again. I wasn’t dumb enough to supply him with ammunition. I know Oliver said that they would stop bullying me, but – that’s just it! Oliver said so, not Edmund! 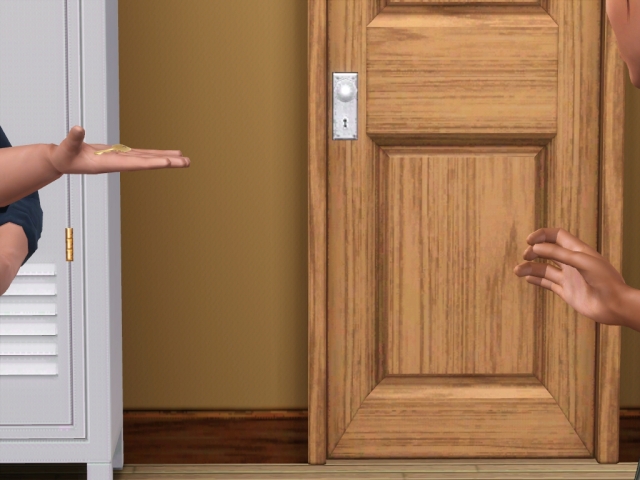 With a smirk still on his face he extended his arm palm up and resting in his hand was the key.

Out of context he was simply handing me the key, just like I’d asked. Well…demanded.

But it somehow seemed a little too easy. Like the outstretched hand was inviting me to being teased.

I took the bait anyways, after some hesitation, and reached for the key. It didn’t surprise me that much when he folded his hand and pulled it back. 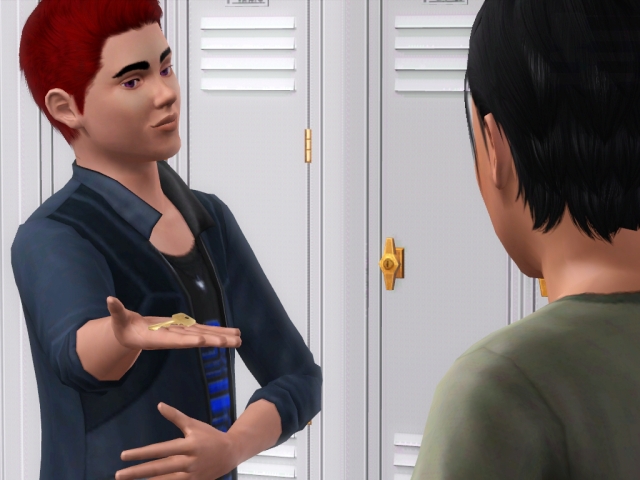 “It’s not going to be that easy. If you want the key, you’ll have to earn it.” He smirked, extending his arm again, but this time he’d taken a step back as well.

“Earn it?” I asked. I didn’t like where he was going with this.

“You’ll have to catch me.” He said with a grin. With that his hand closed over the key again and he sped off down the corridor. 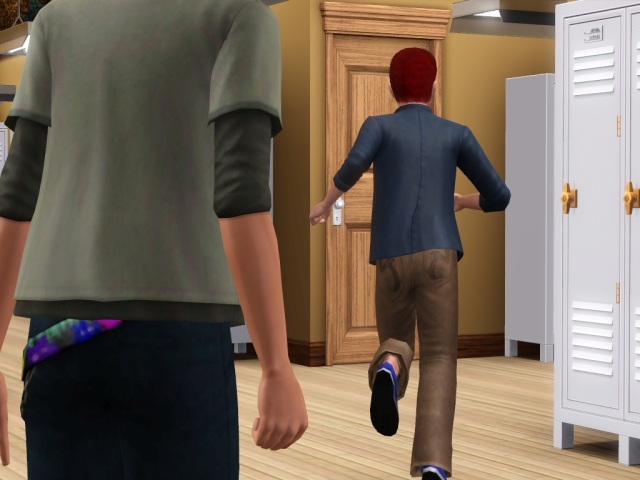 “What!?” I exclaimed incredulously as I watched Edmund run off. I shook off my surprise and with an irritated sigh and I ran off after him. 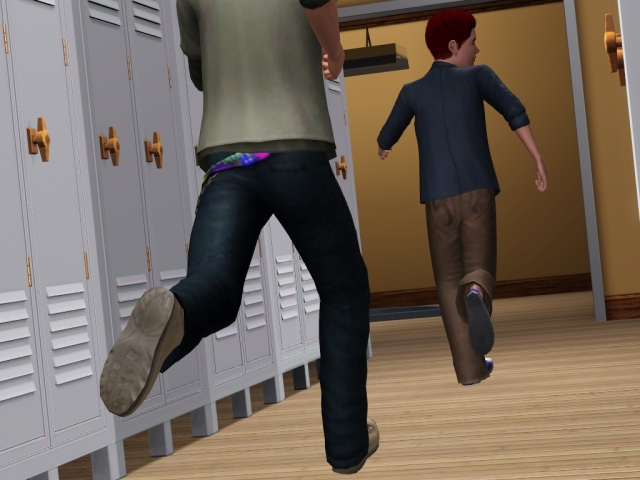 I sped down the corridors trying to catch him and when I started to lag behind he’d turn around and taunt me with the key.

I crashed in a locker when turning the corner once and Edmund laughed when he saw it.

That only put a competitive grin on my face as I got back up and went back to chasing him.

It didn’t matter how much I ran! I couldn’t seem to catch up to him.

He reached the stairs, sitting on the railing as I caught up. He smirked and waved the key to remind me of my goal before sliding down the railing. 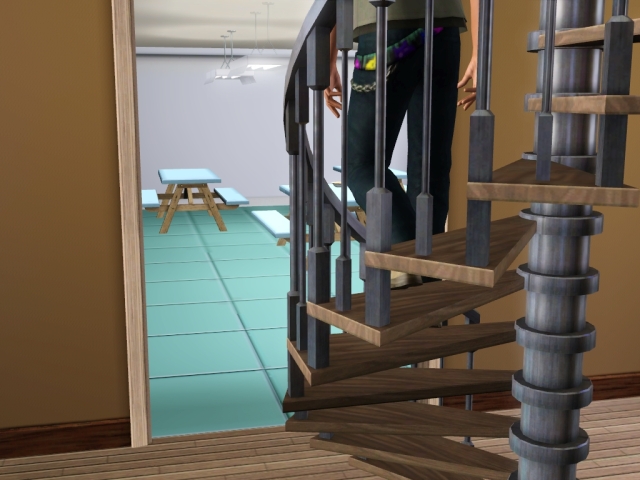 I sped down the stairs, filled with a new determination to catch him.

But as I reached the bottom of the stairs I’d already lost sight of him. 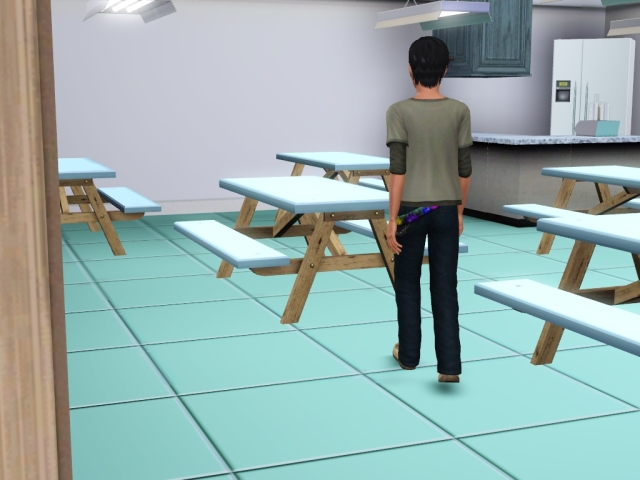 I stumbled into the cafeteria slightly out of breath and checked around, but I still couldn’t see him.

I was feeling kind of weird now. The exhilarating feeling of running down the corridors was slowly dissipating away. The place was completely empty since everyone was in class (which I should be, but he took the key!). I could hear my steps echo in the empty cafeteria now that his taunts and mocking laughs had stopped. 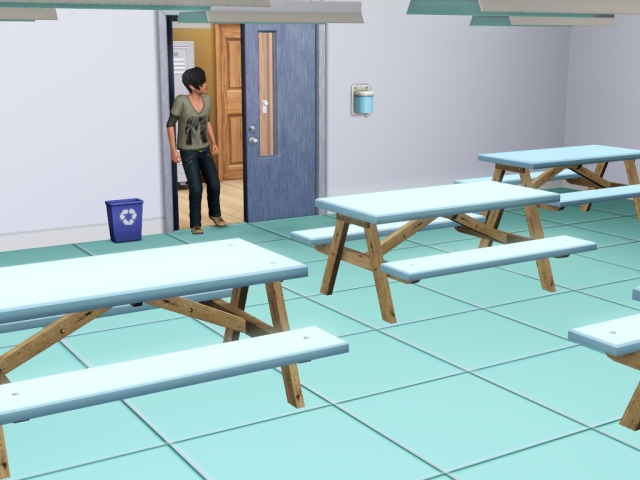 I walked backwards towards the door still checking around the cafeteria to see if he was lurking somewhere.

I don’t know why, but I got this feeling I couldn’t shake off that he was nearby.

With on last look I stepped backwards outside of the cafeteria. 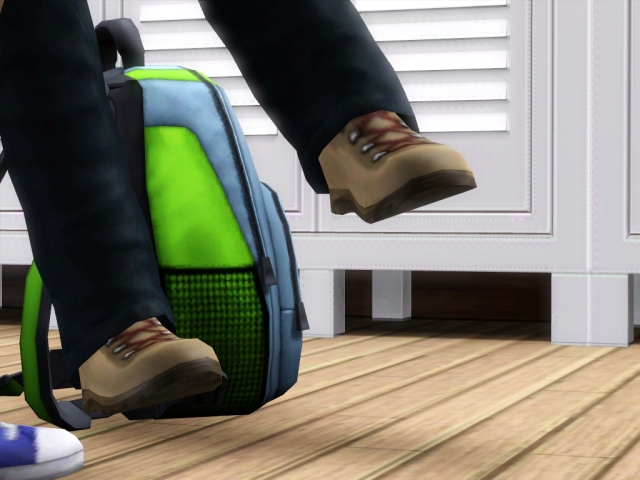 Walking backwards is a bad idea!

Just as I was going to turn my back to the cafeteria, I stumbled backwards onto a backpack someone had carelessly dropped and forgotten. 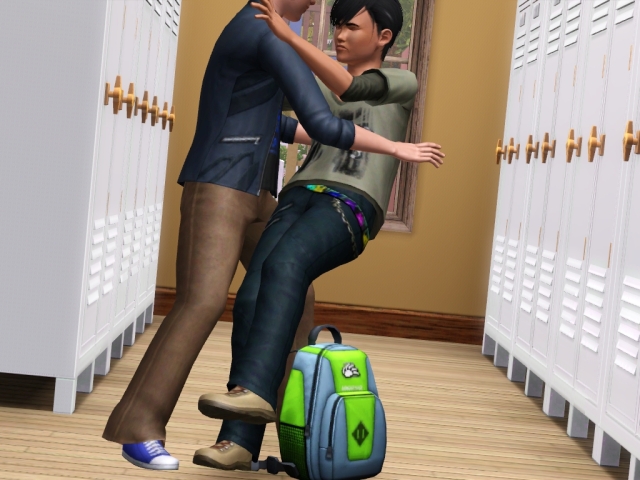 My arms flailed and found something to hold on to stop my fall…at the same time that that something reached out to catch me. 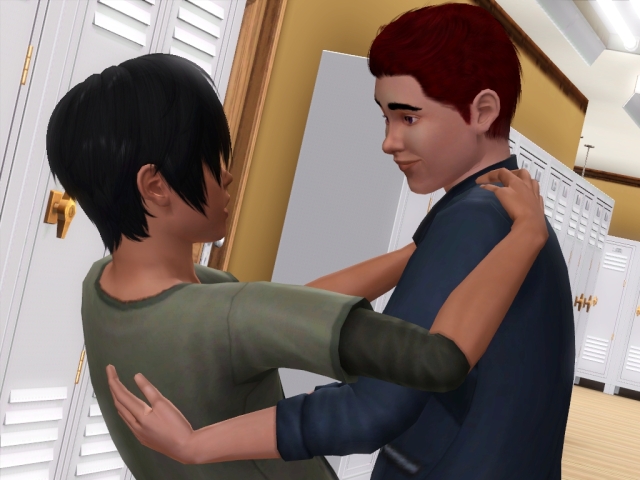 Edmund caught me easily, and in my daze from having tripped I got mesmerized by the genuine amused smile he was giving me.

“You’re kinda clumsy aren’t you?” He said in a voice slightly quieter than normal that made my heart skip a beat.

I managed a nervous smile, but I didn’t say anything. I didn’t trust myself to be able to say anything sensible. Especially since I was already too focused on my hands. Or more on the fact that I could tell he had some really nice shoulders. 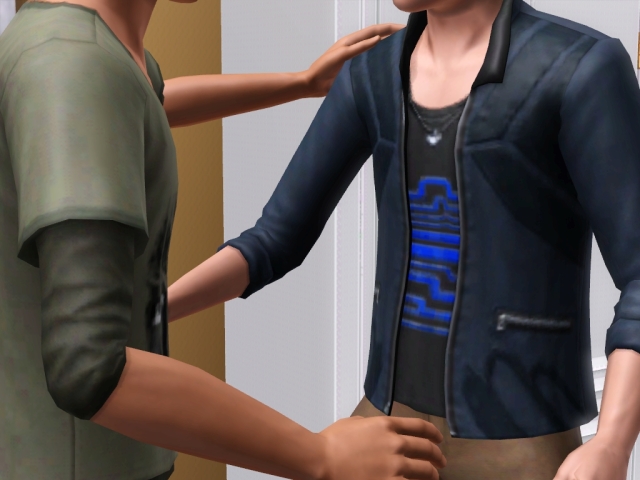 “Thanks.” I eventually did mutter as Edmund brought me back to my feet.

“You good?” He asked trying to make eye contact. “You look kind of queasy.”

“Yeah you did trip.” He chuckled. He then pulled something out of his pocket and showed it to me. It was a key.

I just stared at the key, unsure what the point of showing it to me was. 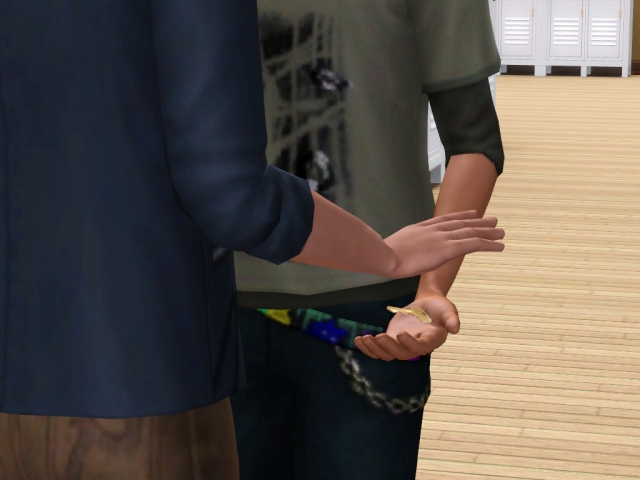 “I’m giving it back.” Edmund said, and I finally clicked. It was THE key. I can’t believe I already forgot why I was chasing after him.

Seeing I understood Edmund dropped the key in my hand. 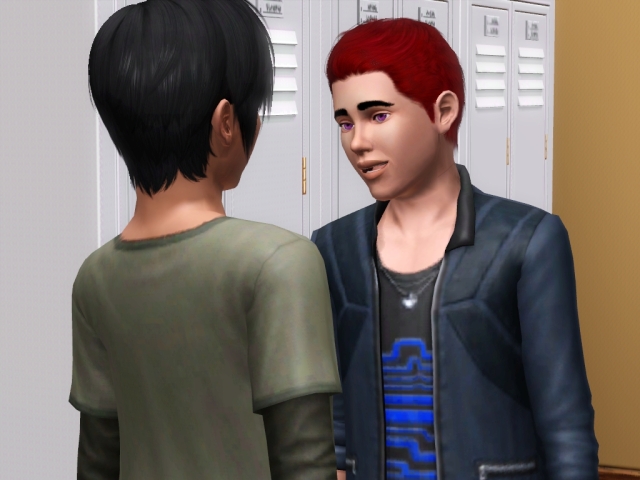 “Oliver told me to be nice so…don’t tell him I took the key ‘kay?” Edmund said with a slightly mischievous glint in his eyes, like this was our little secret.

“Why would you even take the key if you were going to give it back?” I ended up asking, and I was surprised by how easy it was to talk. Well, more like I’m surprised by how casual the atmosphere is. It feels more like I’m talking to a friend than someone whose been bullying me for years. It’s just like that time we ended up having to do an assignment together. 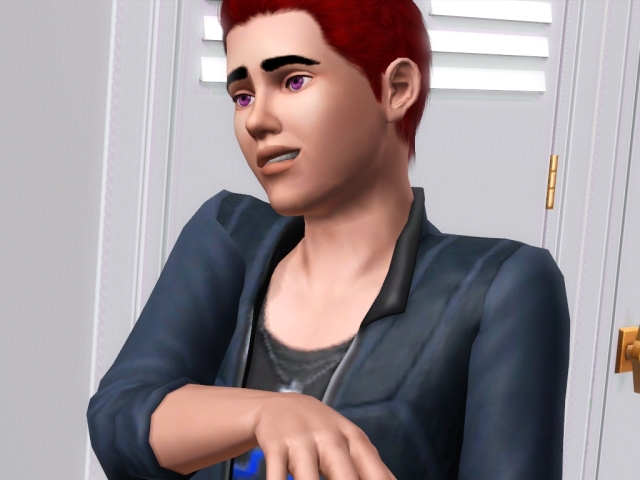 Edmund actually seemed at a loss of what to say to that. Only for a few seconds though.

“Well I did say I’d give it back if you caught me.” He said with an innocent shrug and smile. He’d avoided giving me an actual straight answer. 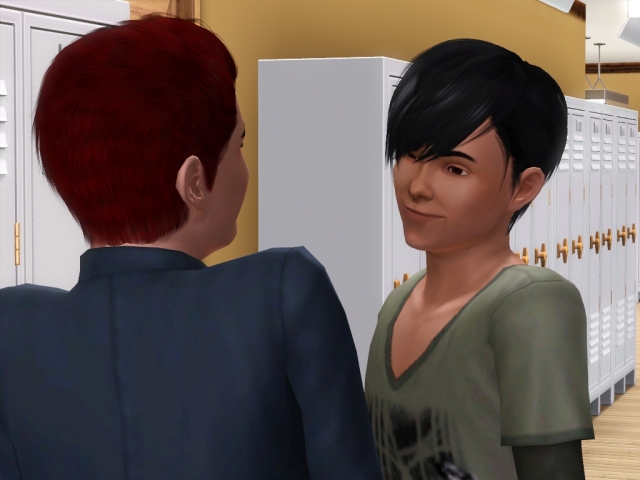 Instead of calling him out on it though…

“More like you caught me.” I said with an uncontainable grin.

I felt the need to run off after saying that. I said it on impulse, but on second thought it sounded pretty dumb! 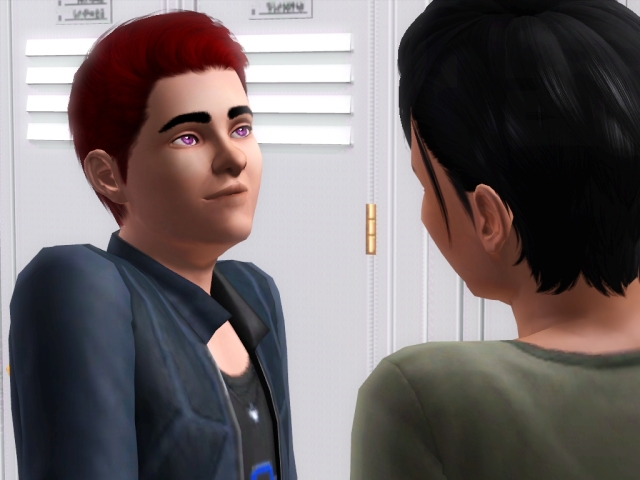 Edmund let out a small laugh. “Yeah I guess I did. I wasn’t half bad was I?”

“No indeed, you caught me pretty nicely!” I complimented, relieved he hadn’t called me out on my lame remark. 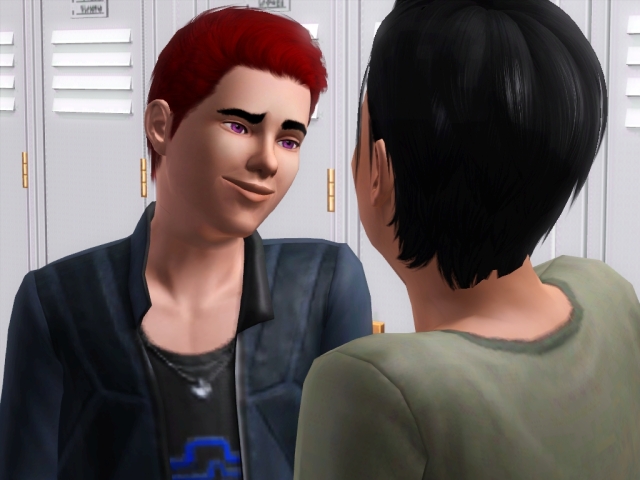 “Well hey, I can’t take all the credit. If you hadn’t tripped backwards so perfectly I probably wouldn’t have been able to catch you.” He replied.

Wow. Who is this Edmund? 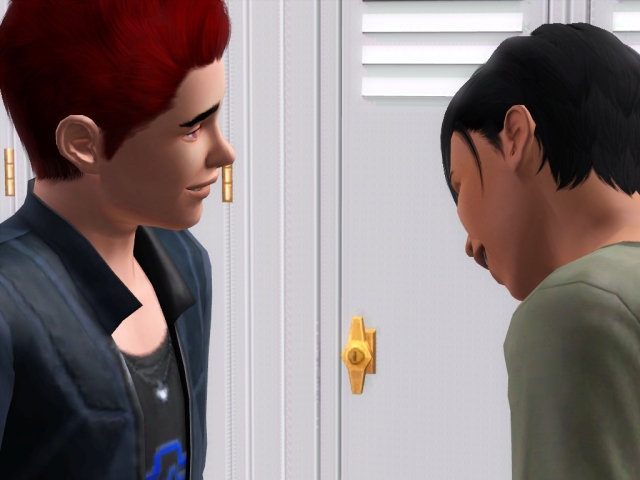 “You’re making it sound like it was a team effort!” I exclaimed with a laugh.

Edmund laughed along at the ridiculous idea. “That’s not exactly what I was going for.” 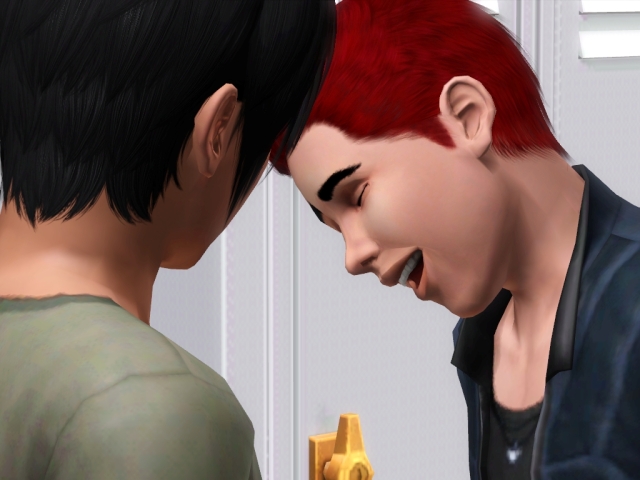 I stared dumbstruck as he let out a laugh that sounded really genuine. Seeing him with such a wide smile on his face was…beautiful. It was amazing to look at.

Edmund’s laugh died down and he looked up, eyes locking with mine. 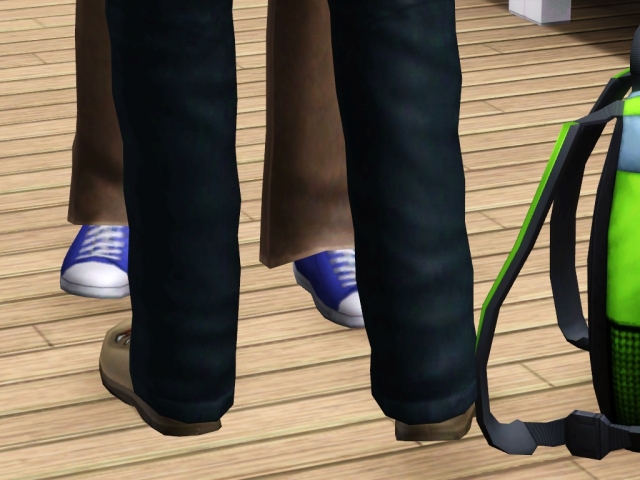 In that small moment it felt like time stopped.

My heart wasn’t beating and I wasn’t breathing. And most of all I was very aware of how small the space between us had gotten…and of how easy it would be to close that distance. 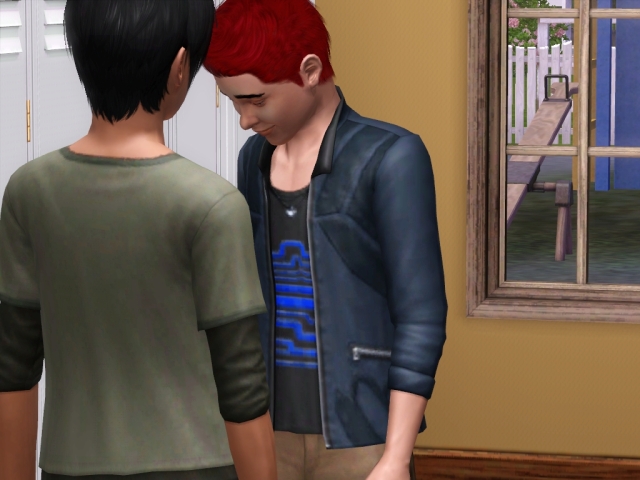 Edmund was the one who spoke next…after taking a step back.

“Well you have your key back.”

“Yeah.” I said. I couldn’t think of anything else to say. Whatever had been going on a few seconds ago was already over.

“And I have to go back upstairs.” He continued. Then when I didn’t reply he gave me a polite smile and made his way around me to go back up the stairs.

I had to say something.

I want to hang out with you. Am I going to see you again anytime soon? Will you listen to Oliver and come hang out with us? Is it possible to think that this is the real you? 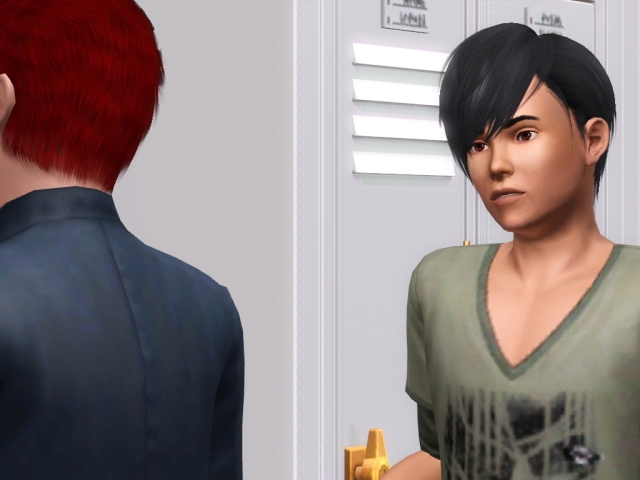 Finally, I managed to say something before it was too late.

“See you around?” I hoped I didn’t sound too hopeful.

It took a second, but he eventually turned to me and flashed me a smile. “Yeah, maybe.” 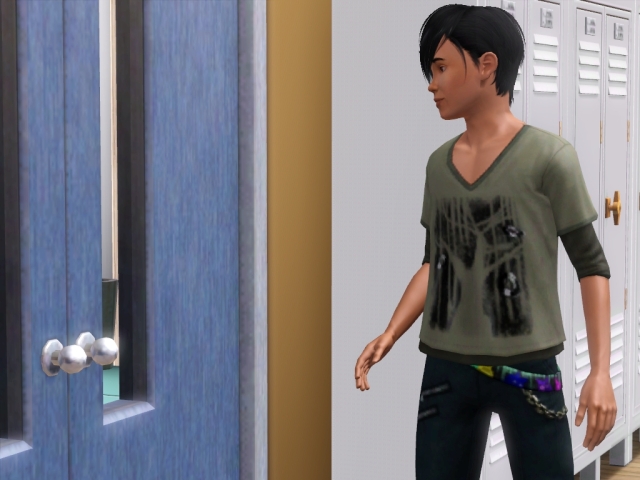 I didn’t move, trying to wrap my mind around the reality of what had happened.

This isn’t the same Edmund who’d bullied me, not at all. He actually reminded me of the Edmund I met on his first day of school.

I was always under the impression he was straight. 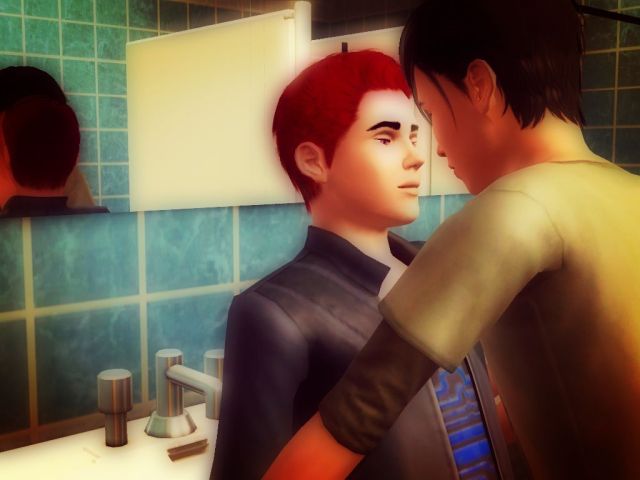 Maybe he hadn’t actually been messing with me then.

WOW. GUYS. This is another example of my lack of control! Xavier and Edmund weren’t supposed to suddenly get along so well just yet. It was not in my plans! *throws ugly written plot notes in the air*

But even if it sounds like I just complained…

Is it me or was that scene like Eddie was giving the key to his heart? *has a troll face on*

I have to say though, Edmund is an awesome sim when it comes to facial expressions. You know some are meh, others have their faces twisted horribly, but Ed pulls off almost every expression flawlessly. Better than Simon (Zyla’s hubbie) ever did! *applause* Well hey that’s just me though.

♪They say it's what you make♪ I say it's up to fate ♪It's woven in my soul♪ I need to let you go♪ -- Demons by Imagine Dragons
View all posts by blamsart →
This entry was posted in Uncategorized and tagged generation 8, legacy, light the way to heaven, sim, sims, sims 3, sims 3 legacy, sims 3 story, sims legacy, sims story, story, whitelight, witch, xavier. Bookmark the permalink.