Also, I had a lot of trouble taking certain screenshots in the middle, so not the best.

A silence had befallen this green town a long time ago. Once vibrant with supernatural activity, once rich with anti-supernaturals, once the beginning of the witch known as the Grim Reaper’s wife, once home to the white-eyed, it was now a town like every other.

Ever since the source of the trouble had moved away, a calm stillness fell on the town, and in no time at all they became oblivious to the one thing that made them unique.

A single house on a simple hill, holding more secrets than anyone could ever imagine.

Overgrown with old worn out memories, the house continues to stand tall as imposing as the day it was built.

Logic claims it should’ve fallen to ruin long ago, before the town stopped taking care of it. But its wood shines like it did on its first few days for the same reason no one ever buys the house. It radiates an aura of magic, strong magic and of intense tragedy. The house has lived and housed many strong supernaturals. It was inevitable in the end that it would become a pillar of magic, with a time machine at its middle.

But the lonely house, after decades of being forgotten, had received visitors once more.

The trees bristled, the wood creaked, the windows glistened, and the door stood still in anticipation as a conflict arose on its very own porch.

Oh how it had missed its Whitelights. 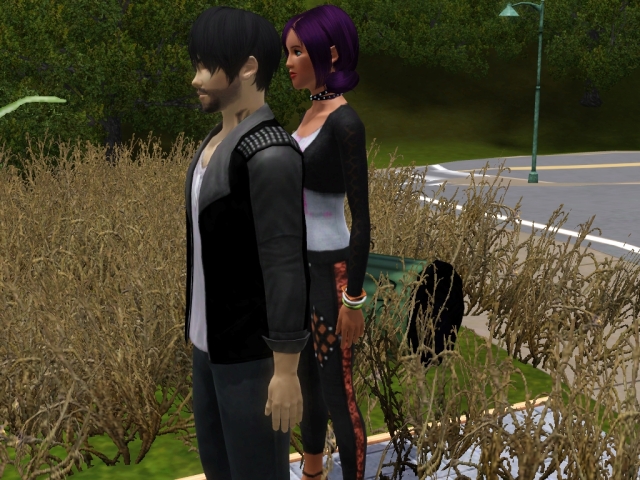 Three weeks, three entire weeks since the beach, and James was finally back to this doorstep facing his daughter and the fairy.

He’d first had a problem with the plane over here which ran into several technical problems. Then he lost time trying to find this place again, only to arrive and find it empty. Apparently the Time Keepers had decided to go on a little vacation to have fun before they came here to their final goal. James managed to follow their progress with the witnesses they left behind, until he finally caught up to them here.

“You shouldn’t have followed us James. Better yet, you should never have done those stupid Time Keepers’ biddings. There’s no way you can stop us.”

James clenched his fists. He had indeed not come up with a solution just yet. He still reflexively reached for their minds, only to be more frustrated when he found nothing.

“There’s not just him you know, I’m here too and I’m a witch. I can stop you with a spell.” Annaliese said but Ry laughed.

“A spell to actually stop us would take too long to cast. We’d already be downstairs.” He said.

Rina caught James’ angry glare. “Don’t do anything too irrational or something bad could happen.”

“Let’s get this over with Ry.” Rina insisted, pulling at his sleeve. He nodded and she headed for the door, a dagger clearly visible in her back pocket.

Ry chuckled again, thoroughly amused with having the upper hand. “It quite possibly is. But you can’t have him back. He likes it in here.”

And with another laugh, Ry followed Rina inside.

Something snapped in James when the door closed behind them.

He headed straight for it, his despairing mind inventing solutions that had low chances of working left and right. Physically stopping them, waiting till they were in the Time Keeper temple and controlling the Time Keepers to stop them,

Controlling Annaliese and making her stop them any way she can.

“James! Do you at least have a plan?”

“I don’t think you do. You said you would, but you’ve been too preoccupied by something else. Did something happen? James it’s a bad idea to go in there without any way to defend yourself. All that to save some hermits living in…what another dimension? Is it really worth it to go in right now? We should get some other help to save your daughter. Isn’t there anyone else who can help us?” Annaliese asked.

There was, but James didn’t have the strength ask her, even if he knew Kyxa would jump on the opportunity. These were his problems.

“You’re going to die if you go in there now.”

James clenched his jaw. It was clear to him that he’d kept Annaliese at his side too long and he’d told her more than she’d needed to know. 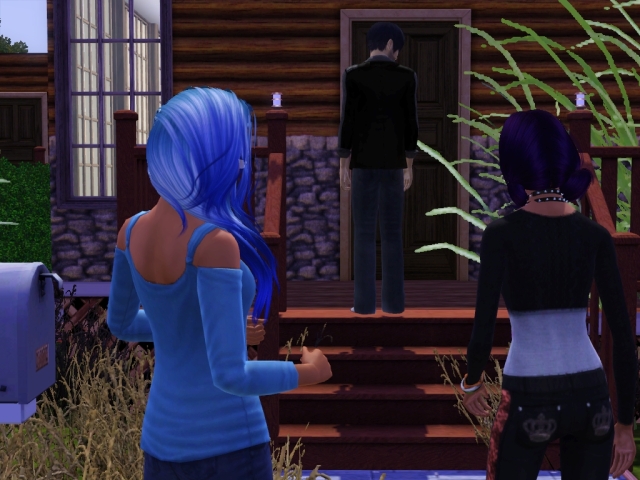 “She’s completely right you know.” A new voice came out of nowhere, surprising the two supernaturals. “If you go inside alone right now, they’ll kill you once and for all. You need help to do your bidding. A lot of it.”

She’d finally caught up to him, only to not only find him in such a state, but to see that he wasn’t the main character anymore. She had to start her search all over again, but she still couldn’t stop herself from trying to give a little bit of advice.

James turned around, annoyed once again that there was someone else he couldn’t sense, but there was no one there.

And James had already forgotten why he’d turned around in the first place. But at least it had somehow given him an idea. An idea he liked.

Annaliese noticed the change in his attitude. “So you do have an idea…”

Ry finished draining the last of the Time Keepers, officially knocking them out.

“The knife.” He said to Rina, extending his hand. She hesitantly retrieved the knife from her back pocket.

“I wish we could’ve avoided this way…”

“So do I, but acquiring the Weapon is impossible now. There are too many powerful players on it. And everyone would jump on the opportunity to kill us.”

“Yes and she’s helped us come this far. Thanks to her, we can save the future before they destroy it. We need to kill them. Hand me the knife.”

With a small nod Rina went to give him the knife when the Time Machine’s doors suddenly creaked open.

“It’s him, it’s James. He really did decide to run after us…”

“The world a favor that’s what. He’s powerless remember? They’ll just be four bodies here instead of three. Hand me the knife.” Ry demanded again. 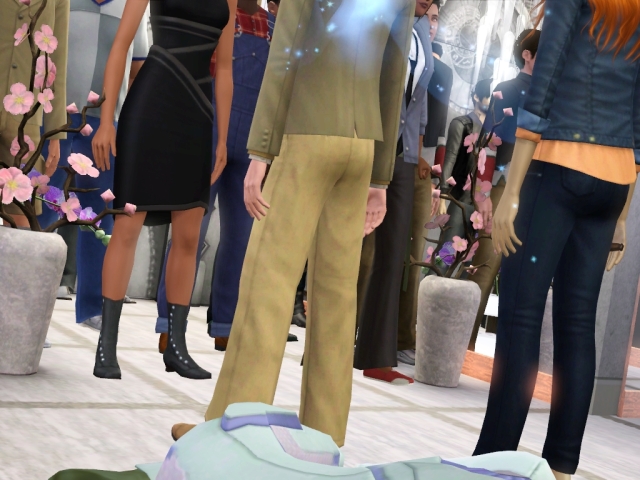 But before Rina could do so, strangers started to pool out of the time machine. Dozens of Twinbrook townies were walking out, all controlled by the very last person to enter.

One of the strangers plucked the knife from Rina’s grasp, and others moved to restrain Ry and Rina.

Ry struggled desperately, trying to drain the strangers holding him, but it did nothing. After all his powers only worked on supernaturals and these were all naturals.

“Release my daughter.” One of the strangers demanded.

“I can’t! What’s done is done, and the bead sealed the deal! You’re just going to have to let it go! Leave us alone!” Rina yelled.

“The bead is the problem? Let’s see if we can fix that.” Another voice said as James’ eyes darkened. The knife was handed to him and he headed towards Ry who was starting to panic.

“NO! Don’t you dare! If you hurt him I’ll kill RayRay!” Rina yelled, stopping James in his tracks. His eyes narrowed in disbelief. “It’s true! I can kill her from inside, and I don’t care if that ends in my death as well.”

James took in a deep breath before controlling one of the strangers to hit Rina in the head hard enough to knock her out. 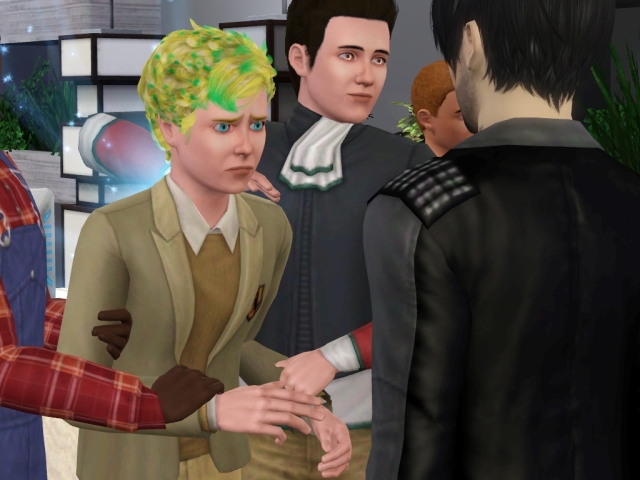 James turned his attention back to Ry.

“Don’t! I’ll…kill that witch’s brother!” Ry threatened, but his threat was empty. The townies lifted him up and laid him down on the table. “Don’t do this! You don’t understand! We’re not doing anything wrong!” 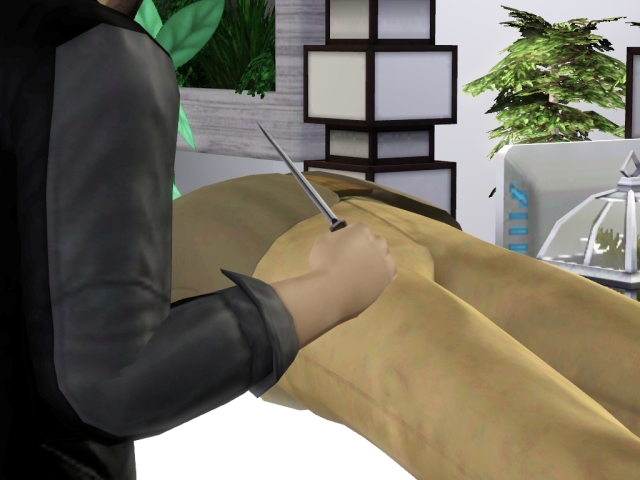 James brought the knife up to Ry’s abdomen, making him squirm in fright.

“If you don’t move you might have the chance to survive this.”

“You’re insane! Stop! I’m not the bad guy here, they are! If you let them live they’re going to kill thousands of people, they might not look it now, but they’re basically the essence of evil! Let me go!”

“You think I care about them? You’ve been nothing but a pest. You stepped over the line when you took my daughter.” One of the townies said.

“You talk too much.”

And with those final words, the knife pierced Ry’s stomach and a man placed his hand over his mouth so his screams wouldn’t make James go deaf.

James worked carefully but rapidly, opening up Ry’s stomach as two of the strangers tried to make sure the blood didn’t overflow with their jackets. Eventually, when James dug his hand inside and found the bead, Ry stopped struggling and the strangers let him go. Sweating and pale, he looked like he was about to faint for the third time when James brought the bloody bead to his face, confirming what it was.

But Ry had proven what James needed to know: Retrieving the bead didn’t kill the host.

Now there was something else he wanted to know. James dug into Ry’s mind mercilessly and isolated the two different minds present inside. Then he chose Ry’s consciousness and attacked it. 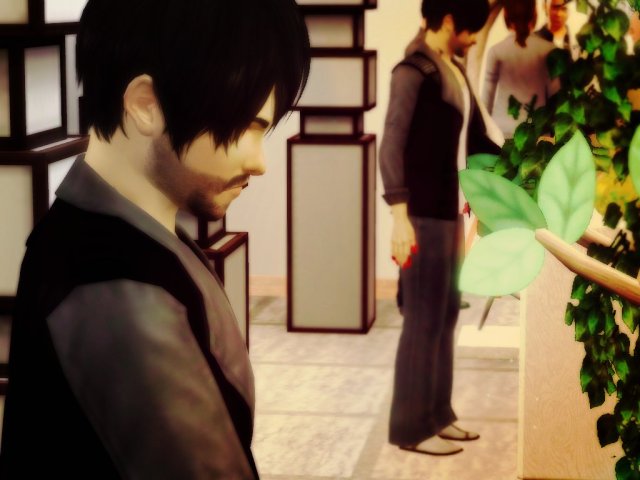 Ry jerked, struggling to fight back and hold on, grasping James’ arm as he did so, but James was too strong. In a matter of seconds James had wiped, eradicated, destroyed Ry from the fairy boy’s mind…but not before Ry had managed to sap, not all, but a large portion of James’ magic energy.

“NO!” The blood-curling scream erupted from the newly awoken Rina’s throat as Ry disappeared into nothing, leaving behind a near death young teenage boy named Ryan.

James could still control, but he didn’t have enough strength anymore to completely control everyone in the room, giving Rina the opportunity to break free from her captors and head for the time machine.

“You’ll pay James! Mark my words, YOU WILL PAY FOR THIS!”

She yelled her final words before slipping into the machine, leaving James to struggle with keeping so many people in control as they started to fight back.

By the time James regained control of the situation, Rina was already long gone. 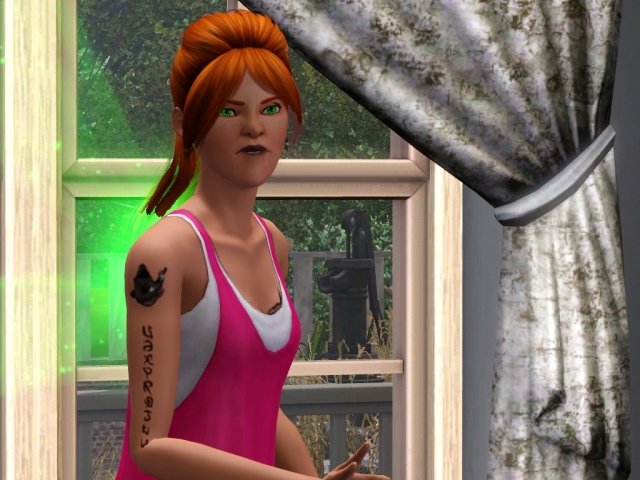 James was welcomed home with a glare.

Kyxa stood in the living room, angrier than she’d ever been in her entire life from a single email.

“How could you?” She struggled to demand. James merely hung his head, already ashamed enough that he’d come back without Catarina. “How could you!?” She screamed.

His lack of reaction only made her angrier.

“I thought we were partners James. Isn’t that what we agreed? When was it that you decided to do things on your own? When did I become just the mother of your children!?”

James started to head towards her, but she stopped him. 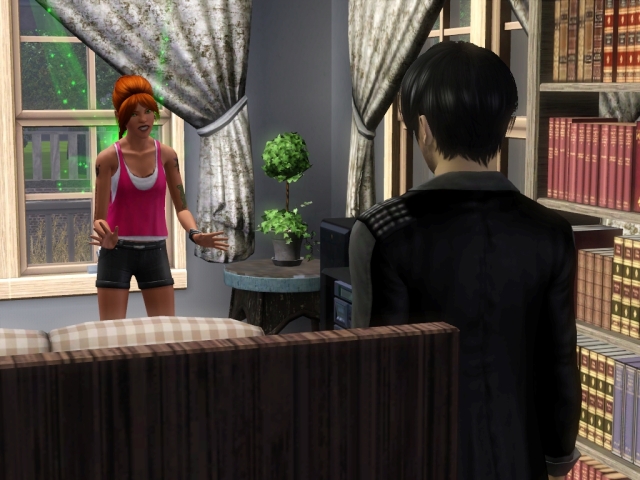 “You were supposed to bring Xavier back not chase him away, you were supposed to keep me updated, not decide to run off Twinbrook without me! You didn’t have to do that alone, but you did and now look what happened? Catarina still isn’t home!”

James stood still, he didn’t know of anything he could say or do at that moment. 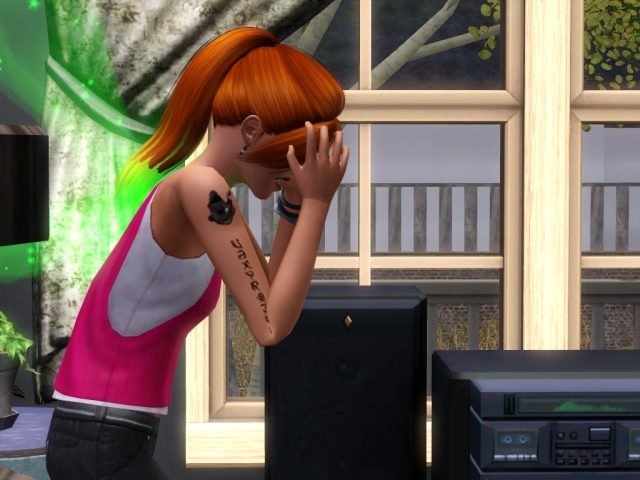 “Why James? Why?” Kyxa asked, her voice cracking. “And now you say your sister predicted your death. That Velor and Assaria are the ones who win…”

With a cry of anguish and frustration, Kyxa hugged herself, willing the tears not to fall.

“We were doing so good James…we were being normal…”

Ugh too many sims in one spot again

♪They say it's what you make♪ I say it's up to fate ♪It's woven in my soul♪ I need to let you go♪ -- Demons by Imagine Dragons
View all posts by blamsart →
This entry was posted in Uncategorized and tagged fairy, generation 8, James, legacy, light the way to heaven, sim, sims, sims 3, sims 3 legacy, sims 3 story, sims legacy, sims story, story, vampire, whitelight. Bookmark the permalink.