Before you guys go ahead and read this chapter, I thought I’d give you the happy behind the scenes first.

So as you can see Nix gave birth! Last chapter actually, but I forgot to mention it.

She gave birth to a bouncing baby boy which I proceeded to name Wirn for reasons that escape me.

Since this is Nix’s kid, I thought it’d be acceptable for me to cheat and grow him just to see what he looks like. 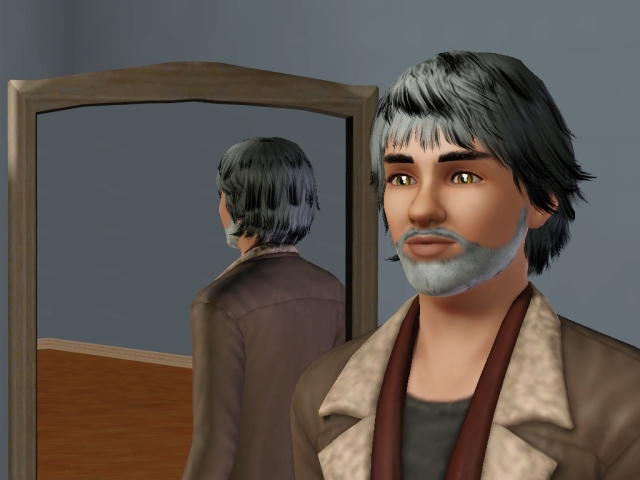 Interestingly enough he got his grandma’s eyes. I kind of wanted Nix to have a baby girl to be honest, so she’ll probably mysteriously fall pregnant again soon XD

Anywho, without further ado. This chapter.

I woke up, surprised to see it was still dark outside. I rubbed my eyes, trying to figure out what had woken me up.

I could hear faint sounds from the bathroom, meaning I wasn’t the only one up, but I rapidly figured out the real reason for my waking up.

I had this lingering horrible feeling in my gut. That familiar nauseating one.

I got up, stifling a yawn.

“Erin?” I whispered, glancing up at the top bunk. Empty.

The nauseating feeling faded away, leaving me with a very tired brain. I was about to crawl back into my bed when the bedroom door opened.

Erin appeared, leaning on the doorway like she was too exhausted to even stand up straight.

“Erin? You okay?” I asked, my eyes wanting to droop shut.

She shook her head.

“No, I just vomited my stomach in the toilet.” She said, looking pretty sick.

“Blaming it on a hangover.” Erin said, groaning a little.

“So you and Oliver really did get drunk.” I whispered with a smirk. Everyone had mostly gone home after Oliver had forced us all to pose for a picture – everyone except those two. Erin had come back near one am looking really drunk.

“Oh my god Xav, don’t start lecturing me on my alcohol intake PLEASE.” Erin complained in a whisper.

“I’m not. But you know, it’s called sharing.” I said, this time being unable to hold back my yawn.

“You go and drink with Oliver so much that you end up vomiting at,” I checked the clock. “four in the morning, and you don’t even bother bringing a bottle to your best friend.”

“Oh har har. Fine I’ll make sure to bring you a beer or something next time.”

“Just common courtesy.” I added with a smile. Erin rolled her eyes but mirrored my smile.

The fact didn’t change that I’d gotten that nauseating feeling, one I hadn’t gotten since Erin’s parents were killed, while she was puking. Yeah, I’ve pretty much established it’s linked to Erin somehow. Which can only mean that her and Oliver…something’s not right.

“Erin, I never told you this, but…” I went to say it, but my sentence trailed off. I had no idea how to go about this. Especially since I was inevitably going to bring up the times she was being abused and when she freed herself from her parents.

There’s no doubt about it, every time Erin was absent, probably being mistreated by her parents, I’d get this horrible feeling. I still don’t know why, but I can at least see the pattern. And me getting the feeling now, means something’s not going right for Erin. And right now that seems to be Oliver. 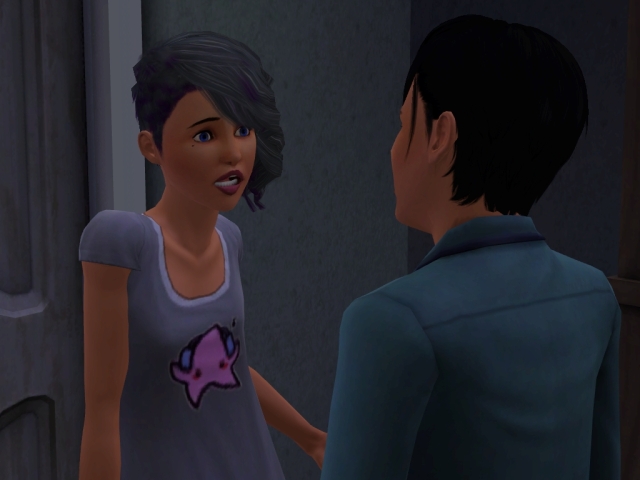 But how do I tell her this? How do I justify it?

“Be careful with Oliver. Don’t get too into it.” I ended up saying.

“You’re…you’re actually…you know this is a form of lecture right?”

“What? Is this witch related or something?”

“Are you jealous?” Erin suddenly asked, looking like she wanted to burst out laughing. I rolled my eyes.

“Then, what is it? You don’t like Oliver? You didn’t like it when he threw that marshmallow in your face?” Erin teased.

“Erin.” I said, giving her an unamused glare. I know it sounded pretty ridiculous and unfounded, but she could at least take this a little seriously.

“Nevermind.” I sighed, slumping on my bed. Here I am, worrying about her relationship, when I’m growing more and more unrestful about mine.

“What’s up?” Erin sighed, leaning on the ladder. I glanced at her. “Just spit it out so we can go back to bed already.”

“…I’m going to give Edmund an ultimatum.”

“Yeah ok! I’m tired of not being able to be myself around him all the time, it’s-”

“Geez, Xav. It’s not that bad. And you know why Edmund has to do that. He doesn’t want his dad to find out and stuff.” Erin said. 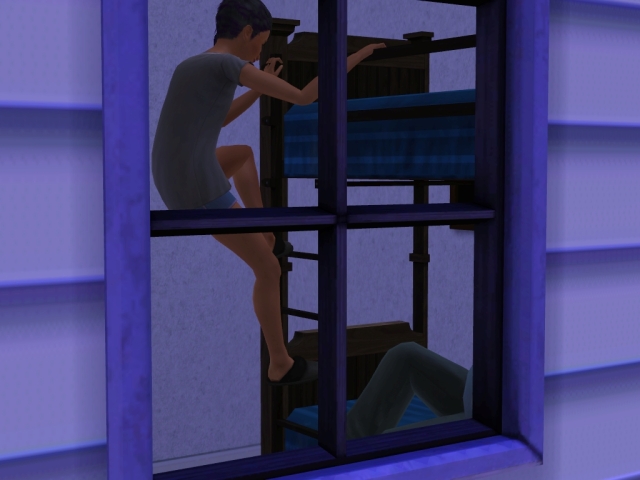 Erin sighed and climbed the ladder. “You’re tired Xav. It’s really not the time to be making snap decisions.”

“You’re failing your class. You can’t come back from this anymore Oliver.”

Yeah, no kidding. I’m quite aware of that thank you.

And every time you do they don’t actually give a damn. Are you ever going to learn? My parents couldn’t care less about my grades.

And then that same annoying thought passed through my mind again.

I should tell her.

Yeah, but no. That’s a really bad idea. She’s not going to react well at all. 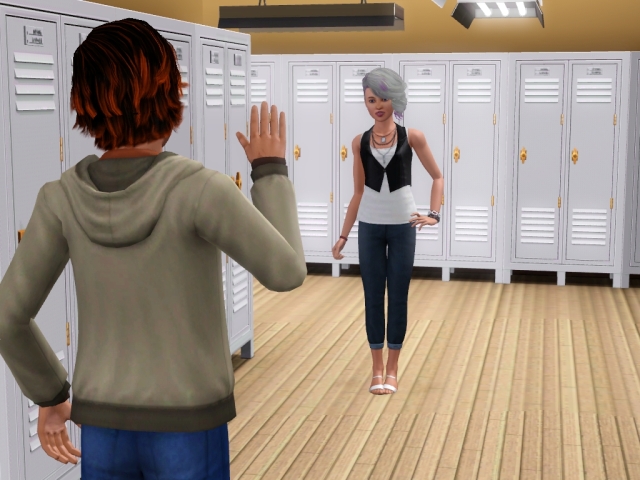 Speak of the devil.

“Oliver!” Erin turned the corner and smiled when she saw me.

I pulled her into an embrace and kissed her.

“You’re really really gorgeous.” I said, realizing I couldn’t not tell her at this point.

“Well don’t look so sad about it.”

“I have something to tell you.” I began. “And it’s not fantastic news.”

Her smile faded a little and her eyes darted away. Did she know already?

“I have something to tell you as well. And it’s not fantastic news either.”

“That’s a mighty fun coincidence.” I smirked, but I could tell from her look that her news was serious as well. “Alright then, let’s meet up after school. You know at the waterfall. The school hallways aren’t really appropriate for this type of news.” 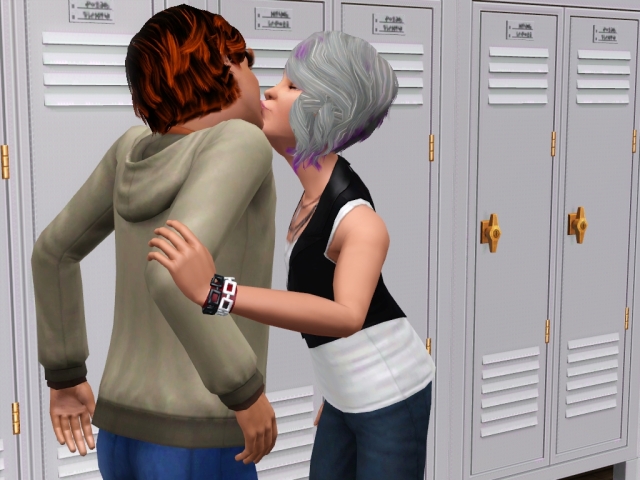 She gave me a sweet smile.

I hope she’ll still smile like that after I tell her.

Damn, this is such a bad idea. 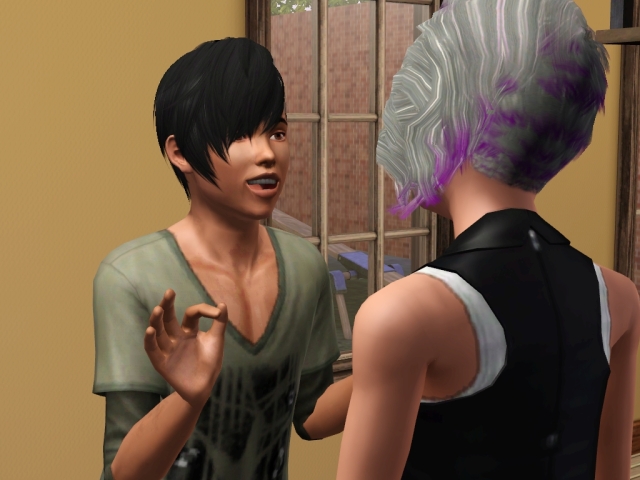 “You’re kidding!” Xavier exclaimed, looking a lot more happy about it than he should be.

“No I’m not! And stop looking so happy! This isn’t happy news at all!” I snapped, but Xavier’s expression didn’t change. 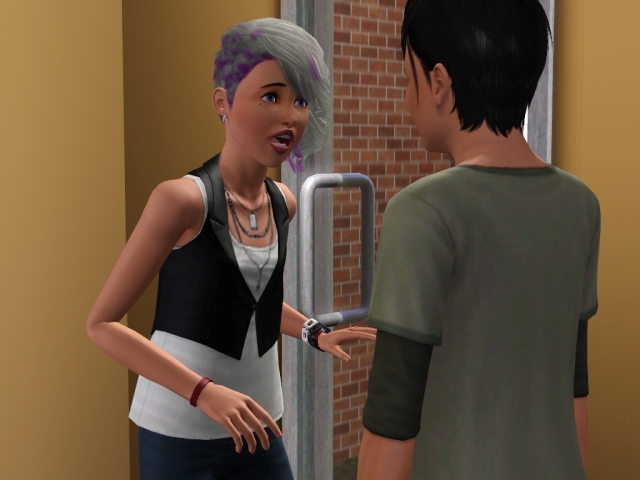 “Yes, yes it is.” I said, hoping I could cut this conversation short. Oliver was probably already waiting for me.

“This is so cool.” Xavier said, giving me a stupid smile again. 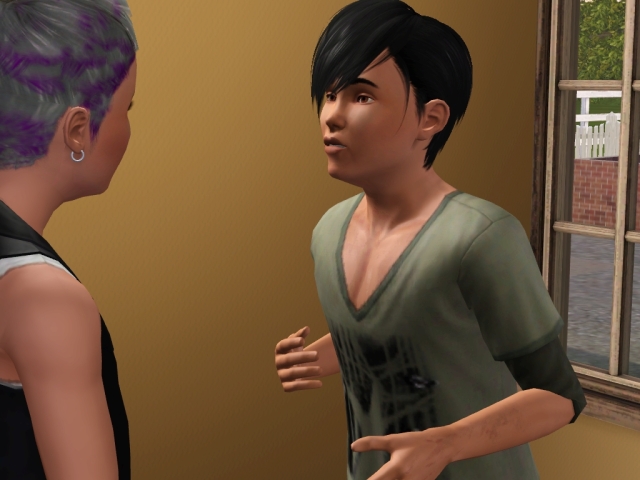 “I regret telling you now.” I said, moving to leave, but Xavier held me back.

I sighed loudly. “Obviously, but I thought it’d be fair if I told you first.”

“No. I just saw you first.” I blatantly said.

“Can I hug you?” He asked, spreading out his arms.

“NO. I’m going to meet up with Oliver now. He better not have the same reaction you just did.” With another roll of eyes, I left before Xavier’s overly cheery mood made me want to strangle him.

Oliver really better not react that way. If he does, it’s just going to make everything harder.

Who am I kidding? Oliver is totally the type to react like that. But I can’t not tell him.

But I guess I could not tell him, deal with it and then act like nothing happened. Could I?

Here I am, only thinking about my news but doesn’t Oliver have some as well? Some that looked kind of serious? Ha, I doubt it’s as bad as mine though.

“No, no that’s okay you go first.” I insisted. Maybe if his news is bad enough I can put off telling mine.

“That bad?” Oliver said with a grin. I nodded. “Alright then. A compromise.”

“We both say our news at the same time?”

“Exactly what I was thinking.” Oliver smiled. I let out a nervous breath.

“On the count of three.” 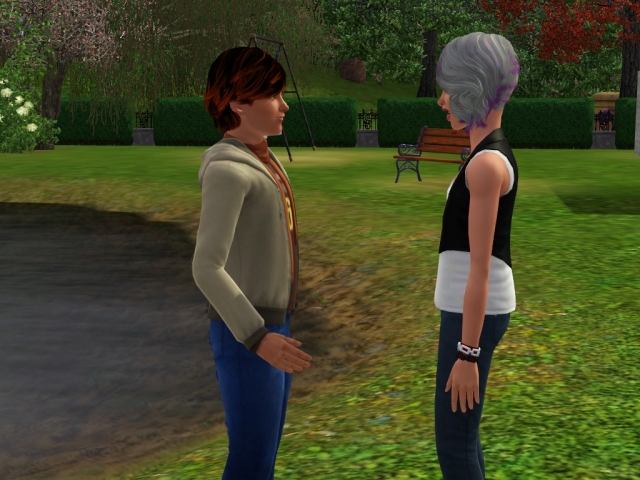 ♪They say it's what you make♪ I say it's up to fate ♪It's woven in my soul♪ I need to let you go♪ -- Demons by Imagine Dragons
View all posts by blamsart →
This entry was posted in Uncategorized and tagged generation 8, legacy, light the way to heaven, sim, sims, sims 3, sims 3 legacy, sims 3 story, sims legacy, sims story, story, vampire, whitelight, witch, xavier. Bookmark the permalink.